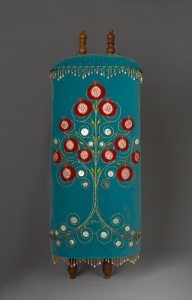 Torah Mantle Dressing the Scroll
The central image emblazoned on this Torah mantle carries a layering of symbolic motifs and evokes the name of its congregation, Eitz Chayim, meaning ‘Tree of Life.’  I worked on the mantle over several years’ time and was motivated to involve members of the community in ways that were meaningful. At the celebration of Purim in 2009, I invited congregants to choose mother-of-pearl buttons from my personal collection that I then incorporated into the design. Around that time, an inspired parallel project developed in which I engaged over forty congregants in the collective weaving of a Torah binder, or wimpel – a distinct ritual textile used to securely bind the scrolls together.

Thirteen Tribes, Ten Sephirot and Chai
The original design of the Torah mantle’s Tree of Life was to include twelve pomegranates – one for each of the twelve tribes of Israel. Rabbi Liza Stern suggested the inclusion of a thirteenth pomegranate for Dina, Jacob and Leah’s only daughter, which I added to the top. Ten mother-of-pearl buttons were chosen for this portion of the design, inspired by the Kabbalistic Tree of Life. Kabbalists believe the Tree of Life to be a diagrammatic representation of the process by which the Universe came into being. The earliest text to which the sages refer to the ten sephirot is Sefer Yetzirah (Book of Creation). One interpretation is that the sephirot are intangible, and yet serve to bind the structure of the world together. The leaves shown here number eighteen, the numerical equivalent of the Hebrew word ‘chai’, meaning ‘life.’ 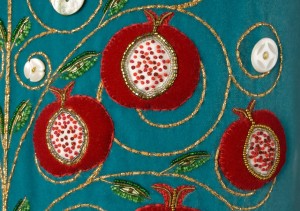 The 613 Mitzvot
Each of the thirteen pomegranates on the Torah mantle contain a grouping of exposed seeds, inspired by the depiction of a pomegranate on 16th century Dutch tile. I articulated the seeds by embroidering French knots that number 613 as an aggregate total, enumerating the number of mitzvot (Jewish laws). The rabbinic tradition interprets the mitzvot as containing 365 negative commandments corresponding to the days in the solar year, and 248 positive commandments corresponding to the parts of the human body. In order to keep accurate count of the number of knots, I printed out Maimonides’ classification of the 613 laws, enunciated each one before sewing the knot, and checked it off the list when the knot was completed.

Dina’s Pomegranate
Rabbi Liza Stern is credited for my inclusion of a thirteenth pomegranate on the mantle’s Tree of Life – for Dina, Jacob and Leah’s only daughter. Dina may or may not have led her own tribe, as did her twelve brothers – but we chose to acknowledge her as a noteworthy biblical figure deserving a prominent place in the design. Dina’s pomegranate sits at the highest point of the tree. I chose a vibrant yellow bead used nowhere else on the Torah mantle to encircle the seeds of her pomegranate.

Four Species of Sukkot
I refer here to the four plant species associated with the festival Sukkot, agricultural in origin. These species are variously interpreted to align with human traits of character and the physical body. Shown here, from left to right, are my stitched evocations of the four species: willow leaves (the mouth, or the lips); myrtle leaves (the eye); date palm frond (the spine, articulated in a straight vertical line with gold metallic yarn); and citron fruit (the heart, not executed as a literal image, but rather, alluded to by its location – a padded, raised area joining roots and trunk, below and above the earth, a container for the Hebrew text ‘She is a Tree of Life.’ 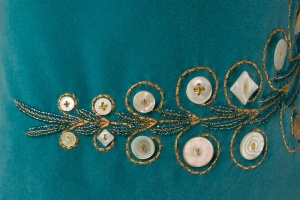 Root Buttons and Willow Leaves
The bifurcating roots of the tree are divided into four sets of mother-of- pearl buttons, each set of buttons numbering seven. Myriad symbolic interpretations exist for both numbers in Judaism. As I came to understand this particular Torah mantle as a feminine-gendered garment, I think of the number four as representing the Matriarchs of Judaism: Sarah, Rebecca, Leah, and Rachel. My thought to group seven buttons in each set was to mirror the seven days of the week, in particular the seventh day, the Sabbath, as a celebration of Creation and entry into sacred time. The willow leaves shown here, one for each mother-of-pearl button, represent ‘the mouth’, or as some interpret, ‘the lips, as a member of the four species of the festival Sukkot. 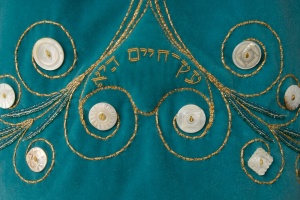 Torah Mantle Dome
The wooden finials of the Torah scroll are thought to be the ‘atzei chayim’ – the ‘trees of life’ – used to roll the parchment. The structural cap of the mantle resting on the wheels of the scroll is domed in the tradition of Sephardic Torah mantles. Here I was inspired to evoke the celestial firmament using metallic beads and tiny paillettes to articulate sun, moon and stars.

Miriam’s Well
The stars of the celestial firmament on the dome of the Torah mantle flow down this hanging panel that partially conceals the opening flap at the back. As a garment detail, the panel was inspired by forms of ceremonial headdress. Symbolically, it illustrates the biblical myth of Miriam’s Well. Shown here are the life- sustaining waters contained by the enchanted well that followed the Jews as they wandered in the desert for forty years, which I illustrated with forty lines of couched metallic threads.

Miriam’s Well (detail)
Mother-of-pearl buttons from my personal collection were put out for display, chosen by Eitz Chayim congregants, and collected in a tambourine carried by Rabbi Liza Stern at a Purim celebration in 2009. Mother-of-pearl as a material has meaning in this context, dangling as it does from the bottom and sides of Miriam’s Well, as it originates from oceans and rivers.

Mantle Removed from the Scroll
The recitation of weekly Torah portions on the Sabbath involves the physical removal of the scroll from the Ark. The person designated for the task of both ‘undressing’ the scroll in preparation for the reading, and subsequently ‘dressing’ the scroll upon the completion of recitation is called a ‘gelilah.’ In the interim period of recitation the scroll rests on a large table called a ‘bimah’ and the Torah mantle, in some congregations, is placed on a special stand. The stand shown here is hand-constructed from walnut by David Cane, a long-time congregant.